It was late morning when the taxi driver dropped us off at the cruise ship. They checked me in, and I unpacked. Then I walked around the ship, which was almost entirely empty, except for crew members. Since Jeff and almost seventy-five percent of the passengers would not be back from Berlin until after 10 pm that night, I went to the shore excursions department to ask if there was any excursions leaving that afternoon. There was one, and so I went on it. (I would have gone on anything they had available to get off that almost empty ship where everything on board was closed!) This turned out to be more interesting than I expected. Our guide was a local resident, who had been born and grown up in the area outside of Rostock. She told us the story of Warnemunde.

Warnemunde is a very old town, dating back to about 1000 AD. It was a fishing village that grew into a port town on the Baltic Sea. Rostock developed much later, around 1200 AD. It was a farming village that grew into a town. And for about 200 years, they paid a yearly tax to Warnemunde so that they could access the port. By about 1400 AD Rostock had grown into a much larger, more prosperous town than Warnemunde. And they were tired of paying the tax, so they bought Warnemunde. It was allowed to keep the name, but from then on it has been just a section of the town of Rostock. 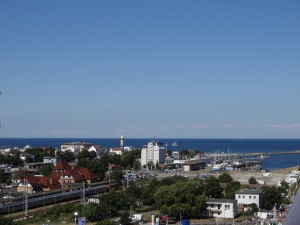 Warnemunde, as seen from the cruise ship.

For the afternoon tour, we drove about 45 minutes to the west of Rostock into the town of Bad Doberan, where the Minister of Bad Doberan is located. I was told by the shore excursion guide that this was a church. And it was, but it was much more than that. The Minister of Bad Doberan is the Ex-Cistercian abbey-church. It was built in 1186 AD, and is one of the oldest churches in Europe! It is the only Cistercian abbey in Europe that has its original interior still intact. And most of the exterior is also original. 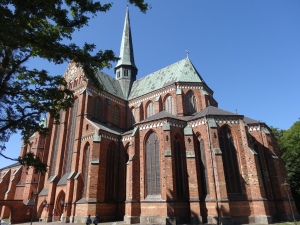 After the reformation and dissolution of the abbey in 1552 AD, it became a Lutheran church. It is still used for church services today. This church was never seriously damaged in any of the wars that swept through this part of Europe, and suffered no damage at all during WWII.

Front entrance door way to the Minister. This is not as big and imposing as many cathedral entrances would become later.

The Minister of Bad Doberan is considered by the Germans to be their second greatest cultural and historical treasure. Thus, even during the time when the communist party controlled East Germany, money and time was put into up keeping and restoring the building.

Building that used to be the living quarters for the monks, and later the ministers.

This tower is a ossuary, which stores the ashes of many monks. There was not enough space on the grounds to bury them. So they were cremated, and their ashes were stored in this tower. 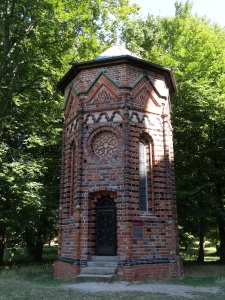 The ossuary of Bad Doberan Minister

Most of the high protective wall around the abbey still remains intact. 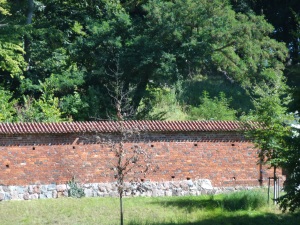 When the first Cistercian abbey of Mecklenburg  formed here in 1171 AD, the monks were given this land by the Duke of Mecklenburg. The story is told that the head abbot didn’t think that this was the right place for the abbey. So he prayed to God for guidance, and then this beautiful pair of swans flew in and landed in front of him.  So he took that as a sign that this was the right place to build the abbey. This statue is supposed to commemorate one of the swans that flew here as a sign from God to the abbot.

This is a photo taken inside the minister, facing the front where the alter is located. 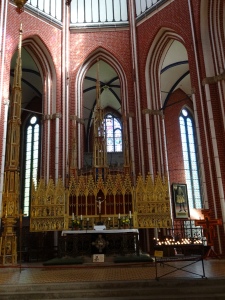 Inside of the Minister, facing front towards the alter.

The main alter was created around 1300 AD. It is the oldest wing alter in the world, and one of only three that remain. It is also very beautiful.

Wing alter in the Minister. It is the oldest alter in Germany.

This candle holder of Mary also dates to about 1280 AD. 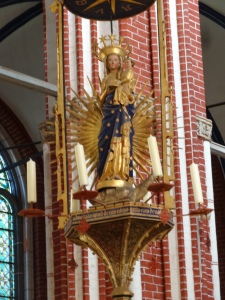 Candle holder from about 1280 AD inside the Minister.

Much of the beautifully carved wood choir stalls and pews inside the Minister are also original. 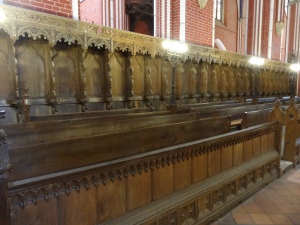 The double sided wooden cross alter and the Lettnerwand divided the monk choir pews in the eastern side from the lay brothers pews on the western side. The cross was created by north German master builder Betram von Mindem in 1360-70 AD. It is the largest and oldest of its kind in Europe. It symbolizes how Christianity is the tree of life, so that is why it has leaves along the sides.

Mary holding Jesus is in the center of this side of the cross. The monks sat facing this side.

Jesus is i center of this side. The lay brothers sat facing this side.

Stained glass window in the Minister, with most sections original.

Here is where the other swan statue is located inside the Minister.

The Bad Doberan Minister was the most important burial site for the Dukes of Mecklenburg, who donated money for its continuing development and upkeep. The chapel of Pribislav, located along the left side of the Minister building, was the burial place and chapel of the House of Mecklenburg since 1302 AD. It was named after Duke Pribislav, who founded the abbey and died in 1178 AD. 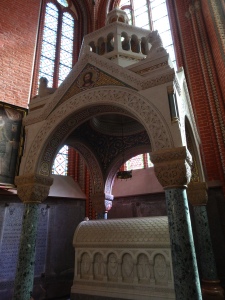 There are many important people (from their time periods) in the tombs and crypts inside the Minister. I only took photos of a few of the most important ones. I have never been inside a church like this before,where it is both an active church, and also the final resting place of many, many people. In the photo below is the tomb of Duke Albrecht III von Mecklenburg, also King of Sweden (died 1412) and his first wife Richardis von Schwerin (died 1377).

As we traveled through the other countries around the Baltic Sea on our cruise, we learned how interlinked and connected they all are throughout their histories. I got my first glimpse of that from the crypts inside the Minister. 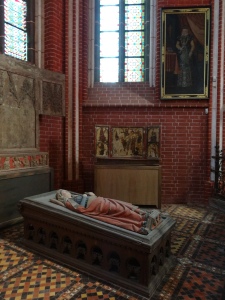 Tomb of Queen Margarete of Denmark (died 1282.) This is the oldest female tomb sculpture in the area, and also the oldest one in all of the Cistercian abbeys in Europe.

This is the granite sarcophagus of Friedrich Franz I (died 1837.) He was the first Great Duke of Mecklenburg, and founded the first seaside health spa town in 1793 in Heiligendamm. He also chose Bad Doberan as a summer residence and attended church in the Minister. The story goes that he wanted his sarcophagus to be sloping from the top of the lid down to the sides. And he also wanted the sides to slope inward. This was to prevent the farmers who came into church every Sunday for services from putting their hats on top of his sarcophagus or leaning up against it when the pews were full. Apparently, he had watched them to do that with the other tombs inside of the minister, and did not want that his remains treated that way. I guess that is what happens when your final resting place is inside of a church that is still being used for services!

The granite sarcophagus of Friedrich Franz I (died 1837) inside of Bad Doberan Minister.

After we left the Minister, we rode the Molli Steam Train that runs from Bad Doberan to Kuhlungsborn along the sea coast. This was the reason that most of the other people had signed up for this excursion. They were not as impressed with the Minister as I was! This was a cute steam train, but I have been on many steam trains, so it was no big deal to me. But it is one of the oldest narrow gauge railroads in the world, built in 1886 to bring people to the sea coast for holidays. According to our guide, it has been called the “Molli” for so long that no one can remember how or why it got that name.,

Here is a photo of the Grand Hotel in Heiligendamm, built by Great Duke Friedrich Franz I.

We got off the train in Kuhlungsborn, which is another seaside small resort town next to Heiligendamm. We had an hour to walk around. I did not stay in the town by the shops. I headed down to the beach, where I took off my shoes and splashed in the sea water. The Baltic sea water was surprisingly warm, much warmer than the sea water back home in New Hampshire! There are no photos from this part my excursion, as I wisely put my camera away to protect it from the sand and salt water!