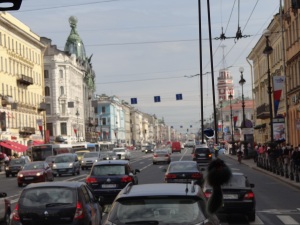 A street in St. Petersburg

St. Petersburg is a city in Russia located on the Neva River at the head of the Gulf of Finland on the Baltic Sea. Swedish colonists built Nyenskans, a fortress, at the mouth of the Neva River in 1611. The land was  called Ingermanland, and it was inhabited by the Finnish Ingrian  tribe . A small town called Nyen  grew up around it. (Another example of how these Baltic countries are all interlinked!) 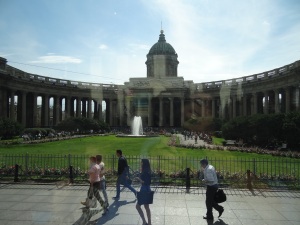 Saint Petersburg was founded by Tsar Peter the Great on May 27, 1703. He wanted a port city on the Baltic Sea to further trade, and to make Russia more “European and modern.” So he started a city here, and he made it his capital of Russia from 1713 to 1728. 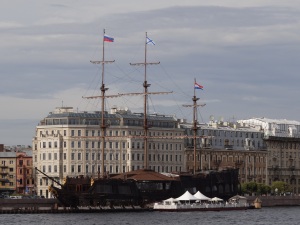 The Aurora (the ship with the masts) is a symbol of the October Revolution and the oldest ship in the Russian Navy. It is docked in front of the Admiralty Building. We could not visit it because it is undergoing restoration.

And from 1732 to 1918,Saint Petersburg continued to be the capital of Russia. It is Russia’s second largest city after Moscow with almost 5 million inhabitants.

This building is where the Tsars kept their horses, according to our guide. It is the fanciest stable that I have ever seen!

Saint Petersburg is also an important Russian port on the Baltic Sea, and is often described as the most Western city of Russia. It is also the second northernmost city in the world to have a population of over one million (Helsinki is further north.).

A close up of one of the statues next to the building for the Tsar’s horses.

The Historic Centre of Saint Petersburg and Related Groups of Monuments constitute a UNESCO World Heritage Site. I think that list includes about 500 buildings, monuments, and statues in St. Petersburg. In other words, you would likely need an entire month, not just a one day tour, to see them all!

This is a monument to Tsar Nicholas I

A Rostral Column, studded with ships’ prows, served as oil-fired navigation beacon in the 1800s. On some public holidays gas torches are still lit on it.

Saint Petersburg is also home to The Hermitage, one of the largest art museums in the world. It was founded in 1764 by Catherine the Great and has been open to the public since 1852. Its collections, of which only a small part is on permanent display, comprise over three million items, including the largest collection of paintings in the world. The collections occupy a large complex of six historic buildings including the Winter Palace, a former residence of Russian Tsars. 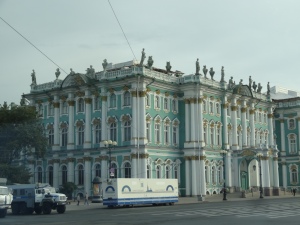 A section of the Hermitage. It certainly looks like a palace from the outside!

The entrance tickets for foreign tourists cost a lot more than the entrance fee paid by citizens of Russia and Belarus. Our two tours of St. Petersburg were very expensive because of the museum entrance costs. But I am okay with that, as I want to see places like the Hermitage preserved for the future.

Crowds of tourists waiting to get into the Hermitage. We were fortunate to come on a day expected to be less crowded than normal.

I was just in awe the whole time I was inside the Hermitage. It was everything that I always imagined a palace would be! Gold, marble, wood parquet floors, and ornate, painted ceilings. I confess that I took almost no photos of any of the famous art inside the Hermitage because I was too amazed by the building itself! I have seen some famous paintings and sculptures, but I had never been in a building like this one!!!!! 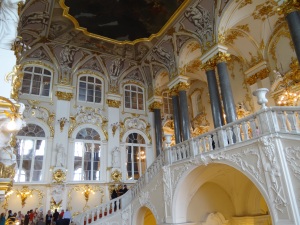 Looking towards the top of the staircase in the Winter Palace

A room in the palace

The floors were amazing, and the wood parquet pattern was different  in every room. I spent a lot of time looking down…

A section of floor in the winter palace 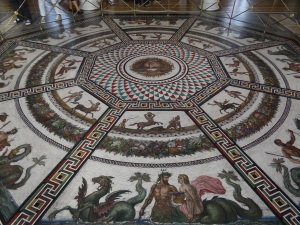 Tile mosaic on the floor of the Winter Palace

…and up. There were paintings and ornate carvings on all of the ceilings, too.

A ceiling painting in the Winter Palace

The view out of the palace windows was great, too!

This is a gold peacock clock sculpture that was given to Catherine the Great. It moves every day at 5 pm.

There is also a lot of wonderful art in the Hermitage. Most of it belonged at one time to Catherine the Great. Catherine the Great started her art collection in 1764 by purchasing a collection of paintings intended for Frederick II of Prussia, who ultimately refused to purchase them. In 1766, Catherine build an extension on the east of the Winter Palace, the Small Hermitage, to put her growing art collection.  During the time of Catherine, the Hermitage was not a public museum and few people were allowed to view its holdings.  Catherine acquired the best collections offered for sale by the heirs of prominent collectors, and her collection soon overgrew the building. In her lifetime, Catherine acquired 4,000 paintings from the old masters, 38,000 books, 10,000 engraved gems, 10,000 drawings, 16,000 coins and medals and a natural history collection filling two galleries. So in 1787 she built another extension that has come to be known as the Large Hermitage or Old Hermitage.

Jeff did take photos of some of the art we walked by while I was being amazed at the palace itself This is a marble sculpture done by Leonardo Da Vinci.

We ate lunch after we left the Hermitage in a restaurant inside a former palace that had been turned into a girls’ school during the soviet era. It indeed felt like I was eating in a Russian palace, which was amazing. Lunch was interesting, mostly french cuisine, but they gave us both champagne and vodka to drink with our meal. Who drinks vodka at lunch? Maybe the Russians do, but I certainly didn’t!

Inside of a Russian palace in St. Petersburg that has been converted into a restaurant.

I am going to end this blog entry here, and cover the second half of the day in the next one, in order to keep it from being too long!