After lunch, we went to St. Isaac’s Cathedral in St. Petersburg. It is the largest Russian Orthodox cathedral in the city. It is dedicated to St. Isaac, the patron saint of Peter the Great, who had been born on the feast day of St. Isaac.

When Peter the Great first made St. Petersburg his capital, he had a small wooden church dedicated to St. Isaac built on his spot. Every Tsar after him enlarged the church, making it bigger and more ornate. The church at St. Isaac’s Square was ordered built by Tsar Alexander I, to replace an earlier structure, and was the fourth consecutive church standing at this place. But there was a problem. The Tsar wanted to build a bigger structure on the same swamp land where the previous cathedral was located, and that smaller cathedral was already sinking under its weight.

The cathedral took 40 years to construct, from 1818 to 1858. This was because the cathedral was going to be a very heavy building (tons of marble), so it has a wooden pillar support structure under it. William Handyside (love that last name!) and other engineers used a number of technological innovations in the construction of the building. The portico columns were raised with the use of large wooden frameworks before the walls were erected. The building rests on 10,000 tree trunks that were sunk by a large number of workers into the marshy banks upon which the cathedral is located. The dome was gilded by a technique similar to spray painting. However, the solution used included toxic mercury, the vapors of which caused the deaths of sixty workers.

This photo shows the model of the wooden structure underneath the cathedral.

The meticulous and painstakingly detailed work on constructing the St. Isaac’s Cathedral took 40 years to complete, and led to an expression in the Finnish language, rakentaa kuin Iisakin kirkkoa (“to build like St. Isaac’s Church”), for lengthy and never-ending megaprojects!

With the end of communism, regular worship services have resumed in the cathedral. There are no pews because everyone stands during a Russian Orthodox service.

During World War II, the dome was painted over in gray to avoid attracting attention from enemy aircraft. On its top, in the skylight, a geodesical intersection point was placed, with the objective of aiding in the location of enemy cannon. 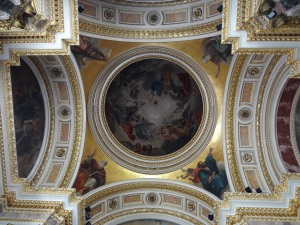 Looking up into the dome of St. Isaac’s Cathedral

The photo below shows a painting of St. Isaac, who I had never heard of before this trip. He may be a very minor saint in the Orthodox theology. 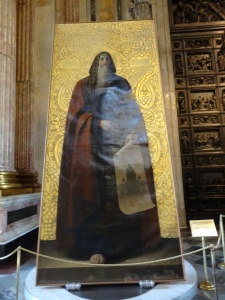 This was the biggest and most ornate of all of the cathedrals that I was in during this trip! 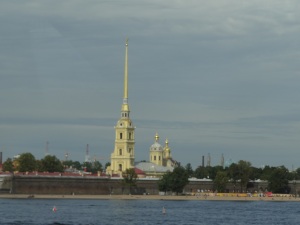 Peter and Paul citadel and Cathedral in St. Petersburg, as seen from across the river in this photo

The names of Saints Peter  and Paul,  are bestowed upon the original city’s citadel (fort) and its cathedral. The Peter and Paul Citadel and Cathedral is where the Russian Tsars have been buried since 1725. Coincidentally, Peter and Paul were the names of the first two assassinated Russian Tsars. Peter II was killed in 1762, supposedly in a conspiracy led by his wife, Catherine the Great. Paul I was killed in 1801 by Nicholas Zubov and other conspirators who brought to power Alexander I, his son. 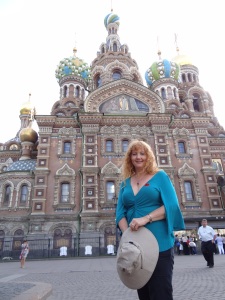 Ann standing in front of the Church of the Spilled Blood in St. Petersburg

The third emperor’s assassination took place in Petersburg in 1881 when Alexander II  was attacked by a knife welding assassin in front of the Church of the Blood. This Church was built on the site where Tsar Alexander II was assassinated and was dedicated in his memory. Construction began in 1883 under Tsar Alexander III, as a memorial to his father. Work progressed slowly and was finally completed during the reign of Nicholas II in 1907. 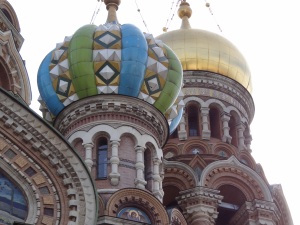 The Church is situated along the Griboedov Canal, where paved roads run along both sides of the canal. On March 1, 1881, as Tsar Alexander’s carriage passed along the embankment, a grenade thrown by a conspirator exploded. The tsar, shaken but unhurt, got out of the carriage and started to remonstrate with the presumed culprit. A second conspirator took the chance to throw another bomb, killing himself and mortally wounding the tsar. The tsar, bleeding heavily, was taken back to the Winter Palace where he died a few hours later.

In this photo, you can see the canal alongside of the cathedral.

Architecturally, the Cathedral differs from St. Petersburg’s other structures. The city’s architecture is predominantly Baroque and Neoclassical, but this church is built in medieval Russian architectural style similar to St. Basil’s Cathedral in Moscow. It is also one of the most frequently photographed cathedrals in Russia, so you may have seen photos of it.

Close up photo of the Church of the Spilled Blood

In the aftermath of the Russian Revolution, the church was ransacked and looted, badly damaging its interior. The government closed the church in the early 1930s. During World War II when many people were starving due to the siege of Leningrad by Nazi German military forces, the church was used as a temporary morgue for those who died in combat and from starvation and illness. After the war, it was used as a warehouse for vegetables, leading to the sardonic name of Saviour of Potatoes. In July 1970, management of the Church passed to St. Isaac’s Cathedral, and proceeds from the Cathedral were funneled back into restoring the Church. It is still undergoing restoration, so we could not go inside of it.

After a long day, we returned to the cruise ship. We stayed awake until 10:30 pm that night to see the show, because the performers were guest artists from a St. Petersburg folk dance group. They were wonderful, and I am so glad that I stayed awake to watch them (even if I didn’t understand a word of what they were singing because it was all in Russian.) 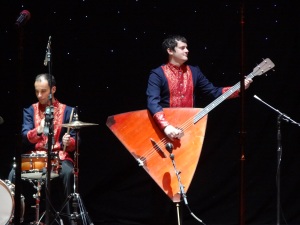 Check out the triangular base guitar!