You know that you are in the jungle when you wake up in the morning with a monkey sitting on your window sill! This guy was cute, but I did not want him helping me get dressed, so I quickly got up and closed my window. 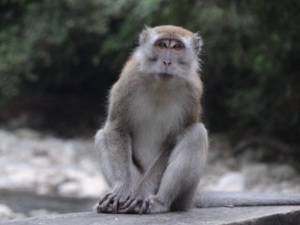 Monkey that was hanging around our guest house in Bukit Lawang.

The boundary of the Gunung Leuser National Park was on the other side of the river, but the monkeys didn’t seem to care about that. There were lots of monkeys in Bukit Lawang during the entire time we were there. 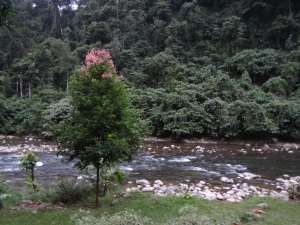 Flowering tree next to the river in Bukit Lawang

There was a restaurant right across from our guest.house, overlooking the river.It was run by a guy who called himself Captain Cool (i don’t know what his real name was.). When we came in for breakfast, there was nobody in the restaurant We asked a man passing by if the restaurant was open, and he went and found Captain Cool for us. We had an amazing breakfast, including this fruit salad. . 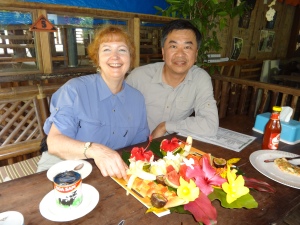 In fact, some of the best food that we ate during our entire trip to Sumatra was served in this restaurant!

Close up of the fruit salad

This was also where we got our first taste of Sumatran coffee. They brew it strong and thick, and it was delicious. But I certainly didn’t need more than one cup to wake me up! 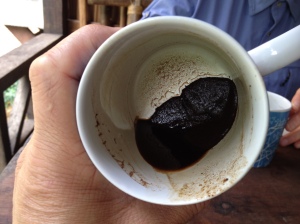 Harmony and Jeff get a little silly!

There is no bridge across the river at the entrance to the national park. You need to swim or take a raft to get to the other side.

Gunung Leuser National Park is a large national park covering 950,000 hectares in northern Sumatra, straddling the border of the provinces of North Sumatra and Aceh.

Sign over the entrance to Gunung Leuser National Park

In 1973 a Swiss organization set up an orangutan rehabilitation center in Bukit Lawang. The purpose of the center was to rehabilitate orangutans released from captivity. The rangers at the center teach the orangutans all the necessary skills to survive in the wild. After an intense period of quarantine and readjustment to the natural habitat, they integrate into the semi-wild population here in the jungle. All orangutans released are still monitored by the rangers and they still provide them with supplementary food at the feeding platform until they become fully self reliant.

An orangutan near near entrance to Gunung Leuser National Park

We saw our first orangutan not far from the feeding platform. She still had her baby with her. The baby was already over four years old, and a good size. Baby orangutans stay with their mothers for five or six years. Female orangutans have their first baby when they are about thirteen years old, and they live for about 40-50 years in the wild. So most female orangutans only have four or five babies during their lifetimes. This low reproductive rate is one of the reasons why they are endangered.

Female orangutan and her baby

We saw ten orangutans during our jungle trek, four mother and baby pairs, and two single, older females. According to our guide, Nijet (I have definitely misspelled his name), the truly wild orangutans can be difficult to spot unless you go deep into the jungle. All the ones that we saw were semi-wild orangutans. We definitely took over 100 photos of orangutans and monkeys during our jungle trek. I am only going to include a few of them in the blog, but I will post the photo albums so you can see more wildlife if you want to.

Harmony and Jeff trekking uphill through the jungle

The park is named after one of its highest points, the 3,381meter (10,143 feet) Mount Leuser (Gunung Leuser). The highest point in the park is “Puncak Tak Punya Nama” (“The peak with no name”).. 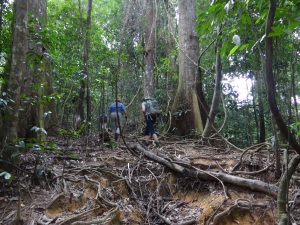 Ann and Harmony trekking through the jungle

Along with the two other National Parks on the island, Kerinci Seblat and Bukit Barisan Selatan, Gunung Leuser is part of the UNESCO World Heritage site “The Tropical Rainforest Heritage of Sumatra”, recognized in 2004.

Tangled vines wound around a tree in the jungle

.We did a lot of trekking up and down in jungle; it was definitely not not flat terrain! Many of these ups and downs were very steep, so we would be hanging on to trees, roots, and vines while climbing up or down. Jeff said that we were all using our “monkey instincts”. 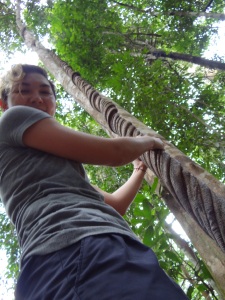 Harmony hanging on a twisted vine in the jungle

Harmony, our other jungle expert, reminded us that it could be much worse. If Sumatra had been still having its heavy rain from the rainy season, we would be sliding around in a lot more mud. The ground was pretty dry, with not too many muddy sections. As you can see, Harmony has great “monkey instincts”!

Harmony climbing some vines in a tree in the jungle

We posed for a family portrait, taken by our guide, with a mother orangutan and her baby in the trees behind us. This is our “we were there” shot, but I also wanted to include it in the blog so you could see how close we got to the orangutans We were never any closer than this, but Jeff has a great zoom lens on his camera, and so that is how we got all the wonderful close up photos of the animals..

Here is a close up of the mother orangutan and her baby. This baby was much younger.

Mother orangutan and her baby

Baby orangutan hanging off of her mother’s arm

We paused for a snack of fruit mid-morning.

Ann and Jeff eating fruit in the jungle

Many of the trees in the jungle were very, very tall!

Jeff, Ann, and Harmony pose near the base of a tall tree

We could hear gibbons making an amazing noise calling out to each other. But they never got close enough for us to be able to see them. But they are loud!

Looking up at a tall tree in the jungle

There were many large ants in the jungle. The photo below is of our guide holding one of these large ants.

There were also some very interesting beetles. I did not realize that this was an insect (it looked like a fungi) until Harmony poked at it and it moved!

There were lots and lots of vines. They were growing everywhere! 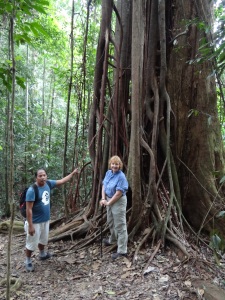 Nijet, our jungle guide, and Ann standing next to a large group of vines growing up to the top of a tall tree in the jungle

Vines growing in the jungle

A vine knot! (We did not tie a vine into a knot, this is ground section of a thick vine traveling between two trees.) 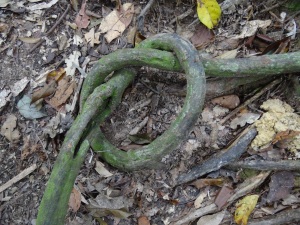 We had a great lunch in the jungle. In fact, all of the food that we ate during our jungle trek was delicious! We had Nijet, our jungle guide, Erwin, our tour guide, and another Indonesian (whose name I have forgotten), who was carrying our snacks and lunch. So there six of us in our jungle trekking group.

Harmony took a nap on a log after lunch. I think that she can sleep anywhere! 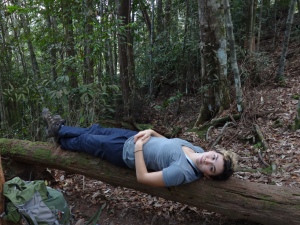 There were fungi of many types in the jungle. During the wet season, from October to March, it can rain daily, usually in the late afternoon and early evening. It only rained at night when we were in the jungle, and we even saw a lot of sunshine during our two days there. Our guide said that we were very fortunate, as it should have been much more rainy and wet than it was.

Jeff is wearing “jungle crown” made of leaves. Our cook made this, as well as a leaf fan that Harmony was using to fan and cool me. 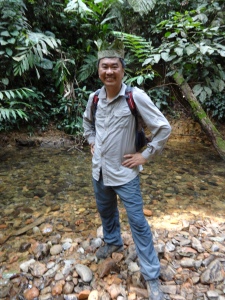 Jeff is wearing a “jungle crown” made of leaves

This is Suma, and she is a large, older female orangutan. She is sitting on the trail, blocking it. Most of the jungle trails were narrow and steep, so if an orangutan was sitting on the trail, there would be no way to pass. Fortunately, we had already started down the trail before she decided to occupy it. But there was another group of jungle trekkers behind us who were blocked. She didn’t move, and so they finally ended up back tracking and taking another trail down to the river, adding another hour to their hike. We know this because we talked with them later on down by the river.

Suma, the orangutan, occupies a trail in the jungle

We were all very happy to reach our camp site alongside the river at the end of our trek. (Still, I almost melted down when I realized that my tired legs were going to have to scramble p a steep bank from the river to get to the tent. But by the end of this trip, I was used to climbing up every night to get to my sleeping quarters!) We were all very sweaty and hot, so after a brief rest, we all went swimming in the river to cool off!

The river that we camped beside in the jungle

Jeff is swimming in the river

When we gleefully plunged into the river water to cool off, we did not realize that we were sharing it with some other critters. Very large lizards, in fact. And not only are monitor lizards very big, but they can swim very well!

A monitor lizard swimming in the jungle river

There were two of them in the river near where we were swimming. 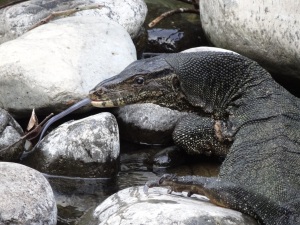 Monitor lizard with his forked tongue out

This was our camp on the bank of the river. 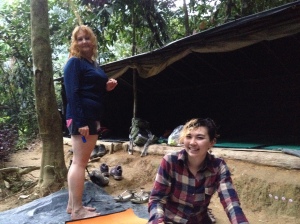 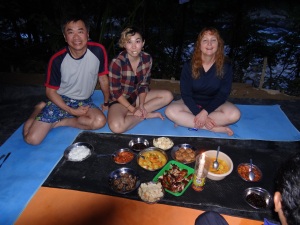 Jeff, Ann, and Harmony in front of their “jungle trekking dinner”

We ate a good dinner of roast chicken, potatoes, spicy tofu, vegetable curry, and puffed rice chips. There was plenty of food, and we were all very hungry after hiking all day. 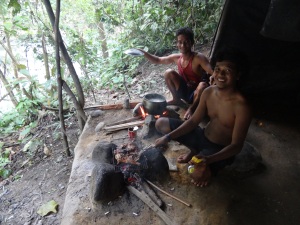 We had two camp cooks, who came up the river with the food for dinner and breakfast. Besides cooking, their other job was to chase away the monkeys. There were lots of monkeys always surrounding our camp, and any time you turned your back on them, they would try to quickly grab something and take it up into the trees. They were worse than raccoons! Several times, we did hear one of our cooks swearing, and that’s when we would know that a monkey had been successful at stealing some food!

I slept well because so I was so tired, even though the jungle was very loud at night. I also discovered that I can still go all night without using the bathroom, if it means going out into the jungle in the dark with just a flashlight! I did not want to encounter one of those lizards or a snake in the dark!