TuDiGong is a Chinese earth god worshiped by Chinese folk religions and Taoists. A more formal name for TuDiGong is Fude Zhengshen, which means the “God of Fortunes and Virtues”. 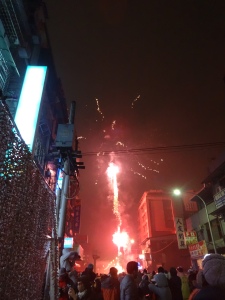 This photo shows a firecracker explosion on top of TuDigong’s carriage, with fireworks shooting up above it from the street

In Taiwan and China,  there are many shrines to TuDiGong. TuDiGong was believed to be in charge of handling the affairs of a village or area. In traditional times, the village concerns were primarily agricultural or weather-related. TuDiGong was not all-powerful, but he was a modest heavenly bureaucrat to whom individual and villages could turn to in times of drought or famine. 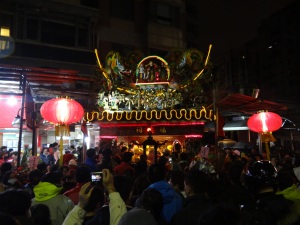 TuDiGong’s shrine in NeiHu. This a a larger, more elaborate little temple shrine than most of the TuDiGong ones that I have seen around China and Taiwan.

Today, he is still worshiped by many people, with many small shrines with his image, some in unlikely places. Many worshipers still pray to him for wealth and success. People often called TuDiGong “Grandpa” (yeye), which reflects his close personal relationship to them. He is also sometimes worshiped before burials to thank him for the use of his land to return the body to the earth. 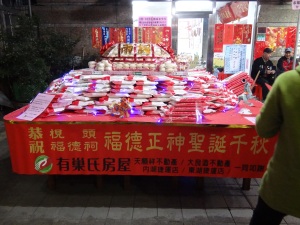 Offerings to TuDiGong outside of the temple shrine in NeiHu

In Taiwan, festivals dedicated to TuDiGong typically take place on the second day of the second month and the fifteenth day of the eighth month in the Chinese lunar calendar. Except in NeiHu, where they honor TiDiGong on the fourteenth night after the lunar Chinese New Year. And HeiHu has a very loud way of honoring TuDiGong!

Jeff and I had gone to the NeiHu TuDiGong Festival two years ago, so we knew what to expect when we moved to our apartment in NeiHu. We knew that we would be able to hear the fireworks from our apartment.  But it turns out that we could also see them! 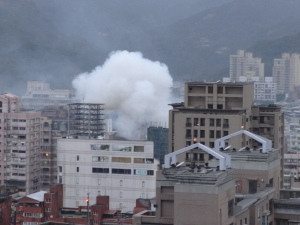 An explosion of fireworks honoring TuDiGong on the street in NeiHu, as seen from our bedroom window!

During the Neihu festival honoring TuDiGong, a statue of the god leaves his temple shrine, and is carried around the streets of NeiHu on an annual visit to see his people and check out how they are doing. Businesses put out traditional altar tables with food and incense in front of their doors. And if they have been successful and done well in the past year, they set off firecrackers to thank TuDiGong. And if they have been very successful, they set off A LOT of firecrackers to thank TuDiGong. And NeiHu has done well, and been very prosperous recently! 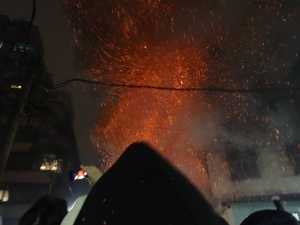 When Jeff got home from work on Friday evening, we could tell that TuDiGong had already left his shrine to tour the streets of NeiHu from the sound of the explosions and the clouds of smoke rising from the streets that we could see from our apartment windows. We hurried to get dressed appropriately and grabbed our cameras and headed out to join in the festivities! 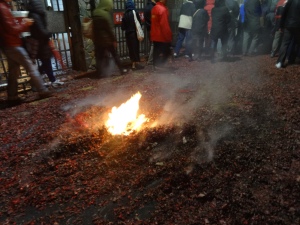 How to prepare to attend the NeiHu TuDiGong Festival?  Wear old clothes, as they could get ruined from the fireworks. (We also dressed in layers as it was a cold and drizzly evening.) Wear boots or hiking boots as you will be walking on streets with firework ashes still burning. Wear a hood or a hat to cover your hair from falling ash and firework pieces. Bring earplugs. And prepare to experience a firework lantern festival unlike anywhere else in Taiwan, except maybe the beehive festival in Tainan! 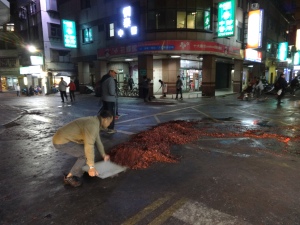 A man cleaning up the piles of red paper left from the firecracker explosion to honor TuDiGong on a street corner in NeiHu.

Jeff and I followed the trail of firecracker papers on the streets and the sounds of the explosions to get to the location where the carriage carrying the statue of TuDiGong was currently traveling up a street in NeiHu. 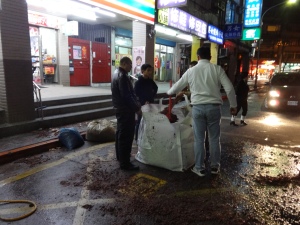 Cleaning up firecracker remnants from the streets of NeiHu

I was impressed by how quickly they clean up the gigantic mess left in the streets by the firecracker explosions! 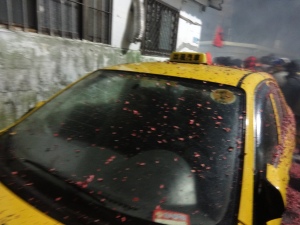 When we got closer to TuDiGong’s carriage, we could hear the shrine music. A shrine lit by many led lights and pulled by a truck accompanies the iron carriage that carries the statue of TuDiGong through the streets of NeiHu. The shrine has loud speakers playing music very loudly. There are also live musicians with horns, gongs, and cymbals walking beside the shrine. This music is in a minor key, and to my ears, it sounds awful, like wailing. The earplugs help to dampen the bad loud music along with the loud explosions! 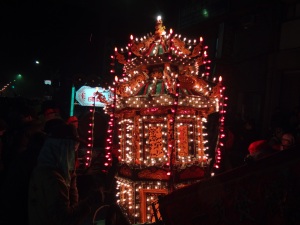 All the men in the photos wearing yellow (fire resistant) vests or outfits are the officials and firemen who accompany TuDiGong through the streets of NeiHu. Their job is to clear the crowd so the shrine and carriage can travel along the streets, and also to try to keep the crowds a safe distance away from the firework explosions. Some of them are also carrying portable water tanks and hoses to put out any fires that might start from the firework explosions. 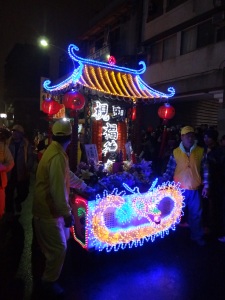 There are two types of firecracker explosions that businesses along the streets of NeiHu set up to honor TuDiGong as he passes. This is an example of one type-a curtain of firecrackers set up in front of the business. 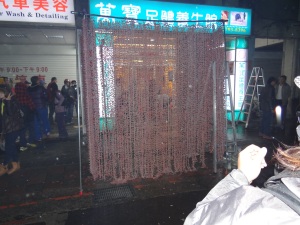 As you can see, there are thousands of small firecrackers hanging in strings from these rods. Individually, each one has just a small light and  bang and when it is set off. But when thousands of them are lit simultaneously,  the result is a very loud and very bright explosion!

Ann is standing next to a firecracker curtain in front of a business in NeiHu that will be lit to honor TuDiGong when he passes by.

When TuDiGong’s carriage reaches this business, it will be pushed into the firecracker curtain and the firecrackers will be lit, setting off the explosion. According to the local legends, TuDiGong loves fireworks and feels honored by them. So, if a business has done well over the past year, and wants to say thank you to TuDiGong, they set off fireworks when he comes by in his carriage to check up on them. And the business owners hope that if they spend the money on a big fireworks display to honor TuDiGong, he will also bring them prosperity in the coming year. 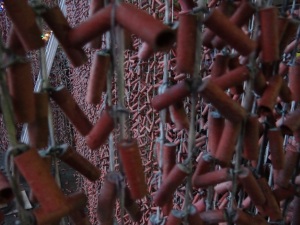 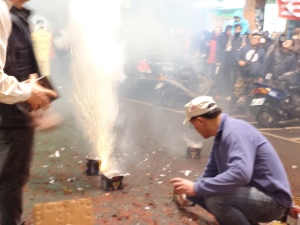 These are beautiful, large fireworks like they used to set off from the streets of Yantai in China during the lantern festival. So you don’t want to be too close when they are lit, as it could be dangerous. You can see the TuDiGong shrine in the photo below. They try to keep the shrine a safe distance from TuDiGong’s carriage and all of the street fireworks. 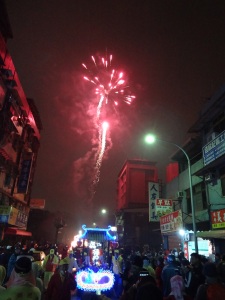 Fireworks going off from a street in NeiHu, with TuDiGong’s shrine in the foreground

I used to be amazed at how fireworks were set off in the streets of Yantai. It could be both unsafe to people in the bullrings and on the street, and also catch the surroundings on fire. But they did it anyway, as it was a centuries old custom. I thought when I first visited Taiwan that they had successfully banned such firework displays. Mostly, they have, but clearly centuries of tradition trump safety during NeiHu’s TuDiGong  celebration! 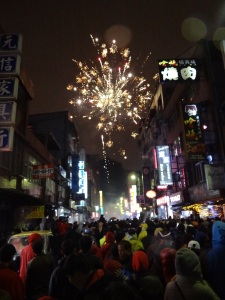 The photo below shows TuDiGong in his iron carriage being carried along the street by the NeiHu firemen. They are the ones that light the firecrackers, and also try to keep spectators a safe distance away from the explosions. Mostly, they succeed, but the firecrackers can sometimes shoot out once they are lit. So we have seen people injured who have been watching the explosions. An irony is that the local HeiHu hospital also takes part in the celebration. The hospital sets off an explosion to honor TuDiGong as his carriage passes by their emergency entrance! I did not include that photo in this blog entry because it did not turn out very well. 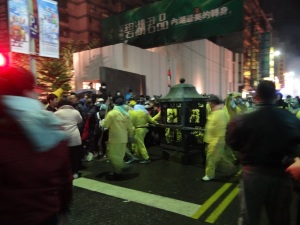 Firemen carrying TuDiGong’s carriage along the streets of NeiHu 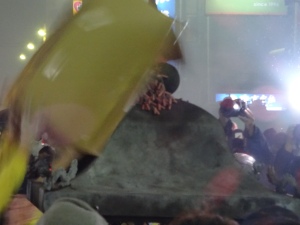 Then they push the crowd of people watching back, and light the fireworks.  There is a big, loud explosion, with lots of light and sulfurous smoke.  Often, the rapid combustion of so many firecrackers exploding at once draws lots of oxygen from the air nearby, so for a few seconds it is hard to breath if you are standing close. 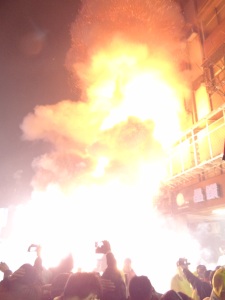 It is amazing to watch-from a safe distance! And many people do. TuDiGong tours the NeiHu streets in his carriage for about three hours, with explosions about every 5-10 minutes. And the firemen do stop frequently between businesses to hose down the iron carriage with water so that it doesn’t overheat. 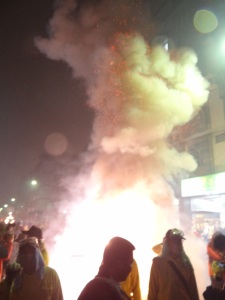 It was a lot of fun to watch the NeiHu TuDiGong festival again! Jeff and I and one of his coworkers followed the carriage through the streets of NeiHu for most of the three hours. At the end of TuDiGong’s tour of NeiHu, they cover the street next to his temple to “urge” him to go home. Legend has it that TuDiGong enjoys being out in the town and seeing the firework explosions so much that he doesn’t want to return home to his temple. so they have to coax him to go home with one last fireworks display. (Imagine an entire street covered with strings of firecrackers! It is one impressive explosion when they go off!) 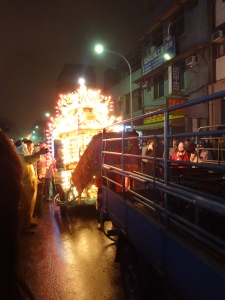 We were mostly staying a safe distance away from the explosions, so once again I want to give credit to Jeff and the great photos that he managed to take using the zoom lens on his camera on crowded streets in the dark. (No tripods here, unlike in Pingxi!)