The Taipei Lantern Festival has become one of the city’s most important annual celebrations. Since its 1997 debut, this 17-year-old festival has become a treasure trove of folk arts. It is visited by both local people celebrating Chinese New Year and foreigners touring Taipei. And over the years, the lantern displays keep getting larger and more numerous.

The lantern festival has its origins in the activities of an agricultural society celebrating the lengthening of daylight hours and the coming of spring after the lunar New Year. Other legends have it that the festival was actually started by an emperor of the Han dynasty (206 B.C. – 220 A.D.), who was a devout Buddhist and who ordered his people to display lights on the fifteenth night of the first month of the lunar year to pay respects to Buddha. According to the same legend, holding torches or lanterns on this night makes it easier to see deities descending from heaven to give blessings to the earth.

Yet another legend has it that in the Tang dynasty, the emperors would celebrate the festival by ordering hundreds of beautiful women to sing and dance with lanterns in the brightly lit plaza. 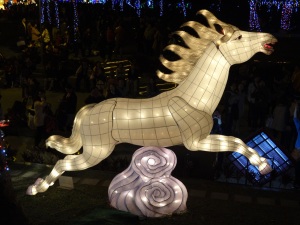 These festive activities gradually spread to the common people and developed into the most popular festival in the yearly calendar. The lantern festival is also called the Little New Year. 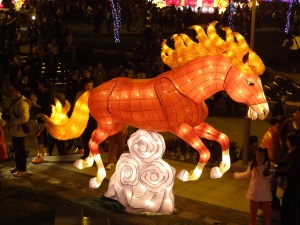 In the old days, these festivities, together with the celebrations for the Chinese New Year, would last for as long as forty-five days. Nowadays the festival lasts for about a week. This year, the Taipei City lantern festival ran from 2/7/2014 until 2/16/2014.

As you have probably figured out by looking at the photos in this blog entry, 2014 is the “Year of Horse” in the Chinese zodiac. I was  incredibly happy to see all of the beautiful, life size horse lanterns that were on display for the Taipei lantern festival. Many of the lanterns looked just as good during the daylight when we first arrived at the festival grounds.

Life size Mongol holding onto a horse lantern display at the Taipei lantern festival, as seen during the daylight

The Taipei lantern festival was on its last day when Jeff and I finally went to see it. This was because there had been a string of cold, rainy days in Taipei. It had rained from 2/6/2014, when we returned to Taipei from Sumatra, until 2/15/2014, for nine straight days of typical cold, rainy Taipei winter weather.

The Taipei lantern festival had outgrown its old grounds in front of the Sun Yat-sen Memorial, and been moved to the Flower Festival grounds in Taipei. So we knew that we would be doing a lot of walking in this more spread out area, and thus we tried to wait for a non rainy day to see the lanterns. 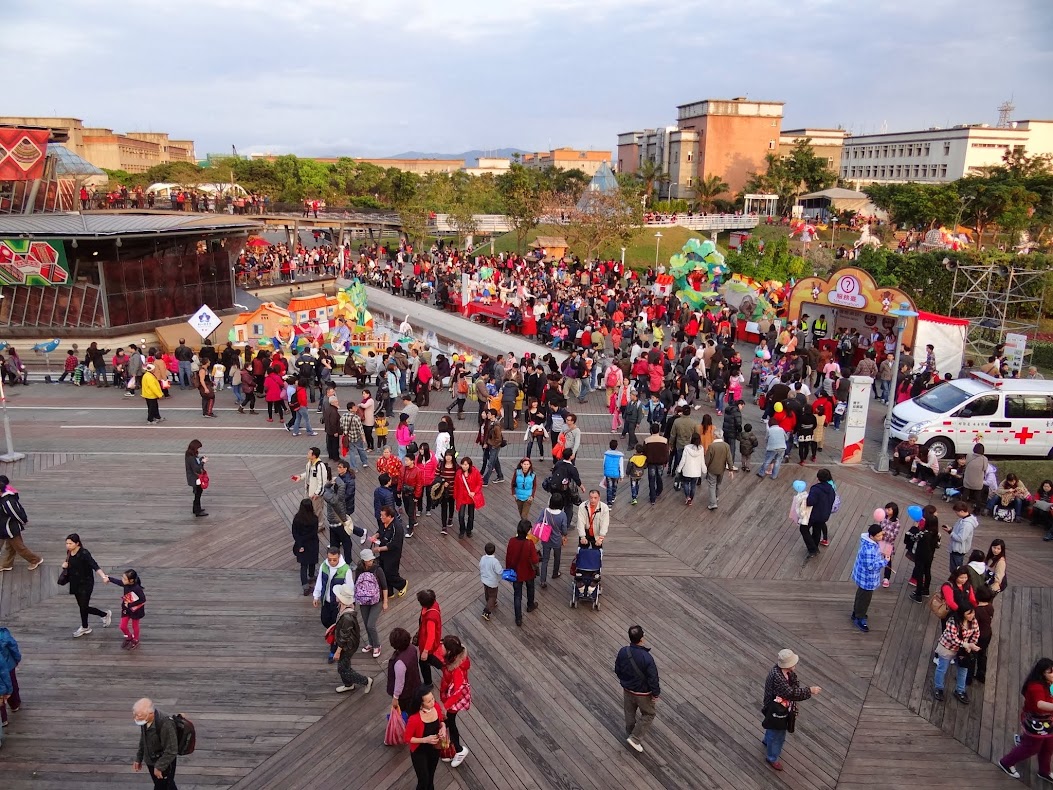 The Taipei City lantern festival reminded me of when I went to see the International Flower Show on these grounds during one of its final days. I think that there were about 100,000 people looking at the lanterns on the nice Sunday evening when we saw them. It was a good thing that the lantern festival had been moved to a larger location, because it seemed like half of the people in Taipei were also waiting for the rain to end in order to see the lanterns! The festival was very, very, very crowded when we went on Sunday night.

I am still wearing my panda vest, because we went directly to the lantern festival from Yangmingshan National Park, where we were looking at the flower blossoms to the 2014 Taipei Lantern Festival.

The bus that goes back to NeiHu makes a stop on the way at the subway station next the the flower festival grounds. So it was on our way home, and it made more sense to see it before we went home. It also gave us a chance to see the lanterns in the daylight 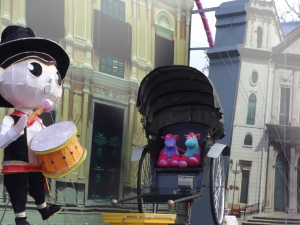 The main centerpiece lantern was a giant horse this year. It clanged colors during a light show every hour, but did not do anything more amazing than that. 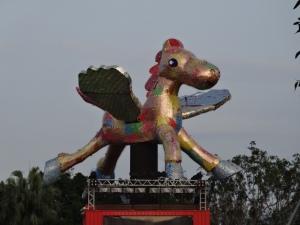 But what was interesting was the interactive display on the base pedestal of this horse lantern. There was a camera that took real time video of the people watching the screen, and then displayed that video with computer animated horses interacting with the people watching them. It was a alot of fun, and we both stood and tried to interact with the horses on the screen!

Ann and Jeff are among the audience members on the screen watching the computer animated horse in the arena.

There were many different lantern areas set up around the festival grounds. Some lantern displays were about historical events 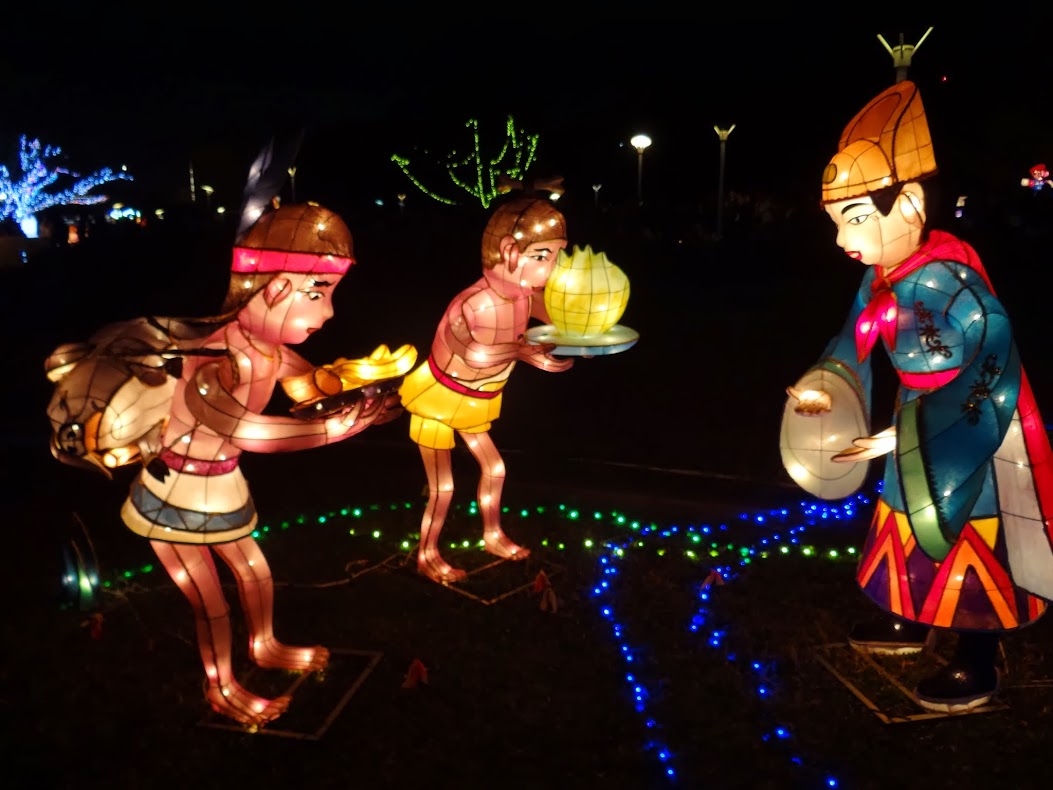 Some lantern displays were about Chinese legends. 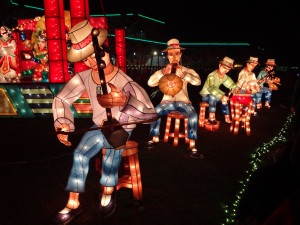 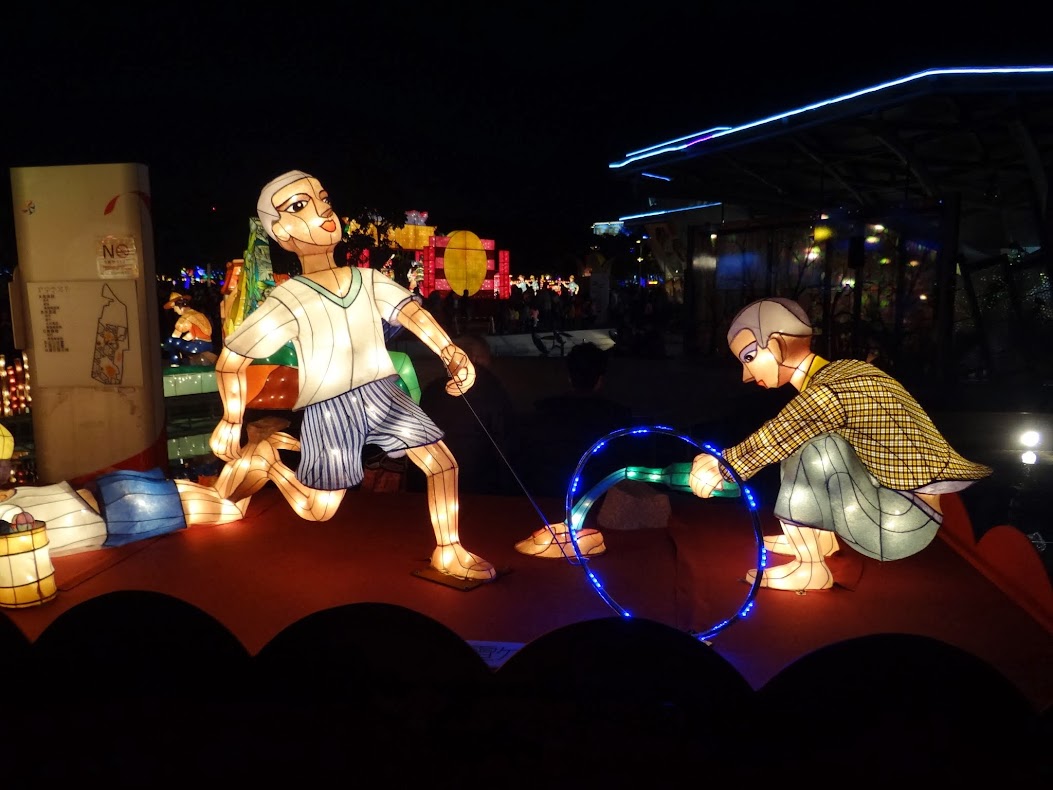 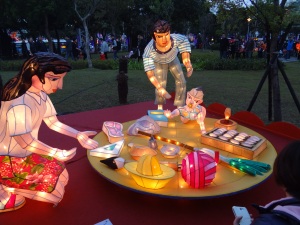 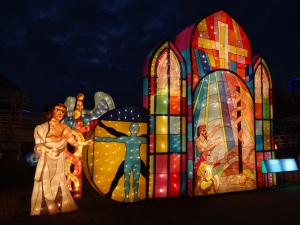 The street alongside the Lantern Festival was decorated to be a “Sea of Blissful Lights”:Light displays were in the center of the the traffic islands and the trees were decorated with lights between Civic Blvd. and Zhongshan Bridge..

The lights along the street were very pretty, and they were just starting to show up in the dusk light when we were there. 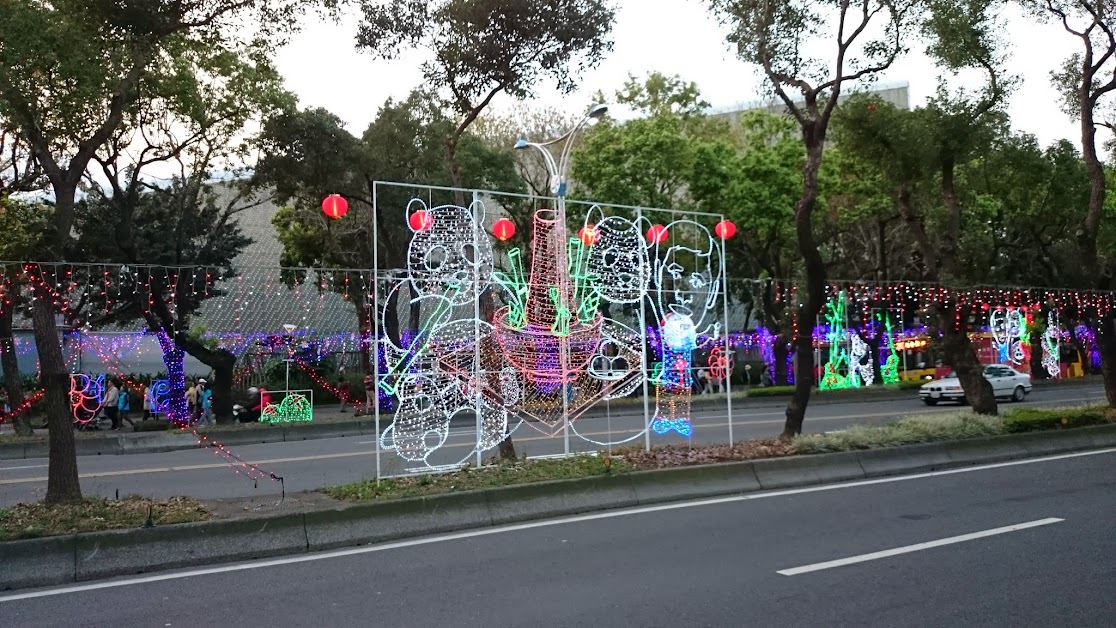 There was also a tunnel of lights in a section of the festival grounds.

People walking through a ight tunnel on the Lantern Festival grounds

There was an area of lantern displays featuring fairy tales. I loved the chickens!

And, of course, there were panda lanterns!

A lantern display with pandas at the Taipei Lantern Festival

And there was a “National Student Lantern-Design Competition” Area: The lantern display pictured below was designed and put together by college students. It was titled “The Evolution of the Horse”. 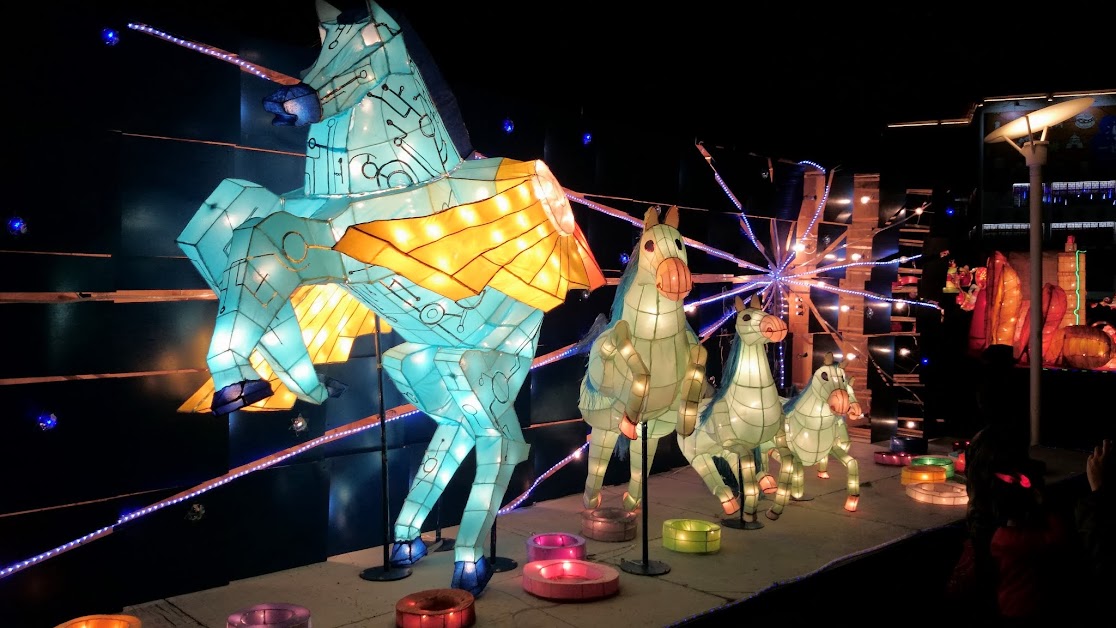 A lantern display designed and put together by college students

Many of the trees in the flower festival grounds were also decorated with lights.

It was a very beautiful and enchanting way to spend an evening! Next year, I hope that we can go on an earlier day of the lantern festival, and perhaps avoid some of the crowds.

A sculpture decorated with lights on the Taipei Lantern Festival grounds