Ann and Jeff pose in front of the state capitol building in Austin, TX

On my way home to Andover, Massachusetts, I joined Jeff for a weekend in Austin, Texas. This was the first time that I had been back to Austin in many years. Some things have changed a lot since we lived there, and other things have not changed at all. 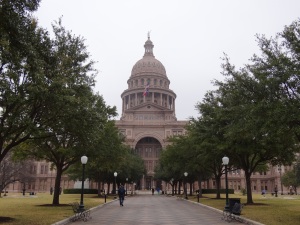 A view of the state capitol building from inside the gate

Star of Texas in the floor of the state capitol building

Well, okay, we still could not tour the senate and representative chambers in the state capitol building because middle school kids from all over the state were in Austin that weekend to learn about how state government runs. They were in the chambers “proposing and trying to pass” bills.

But we did get to tour the large underground section of the capitol. This was added during the renovation while we lived in Austin. This was my first time seeing this addition to the building. It is very large; there is now more square footage underground than above ground in the capitol building! 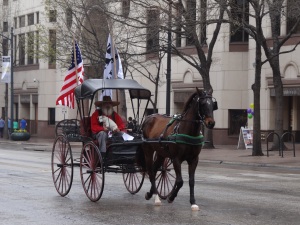 Another thing that has changed since we lived in Austin is that they now have a parade in the downtown to celebrate Texas Independence Day on March 1. Jeff and I went downtown to watch the parade. They were buggies in the parade, with people in costumes from the mid-nineteenth century.

It was a drizzly, cold day, so there were not many spectators. But that did not seem to matter to the folks in the parade. They still did their performances along the parade route.

People in 19th century costumes performing along the parade route

Ann practices the “long horn” salute that spectators were giving to people in the parade!

After the parade, we walked around the downtown section of Austin.

Downtown Austin has many interesting statues. The giant guitar celebrates South by Southwest, and all of the amazing musicians who come from Austin. 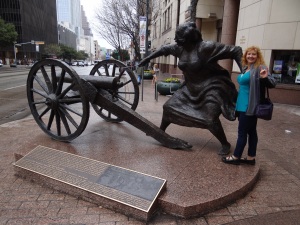 I learned something new about Austin during this trip. Apparently, they were going to move the capital of Texas from Austin to Houston shortly after Texas became a state. Some of the residents of Austin rebelled, and fought an actual mini battle to keep Austin as the state capital. This statue honors the woman who helped Austin win that battle with the rest of Texas! 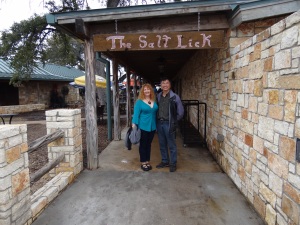 Ann and Jeff at the Salt Lick, a favorite barbeque restaurant in Austin, TX

Visiting Austin also gave us a chance to hang out with old friends and eat some great barbeque!

Jeff and Dave Kieffer at the Salt Lick. Lots of empty plates!

One of the first places that we ate in Austin many years ago was the Oasis. It had mediocre food but a great view of the sunset over Lake Travis. The old Oasis burned down, and they rebuilt a huge building in its place. We did not try to eat at the new place, as we were told that the food is still not very good.

Lake Travis has changed, too. Years of drought have converted it back into a river. The dam is still there, but the water line has dropped so far that land has reemerged. It now looks more like the Colorado River before the dam was built.

Lake Travis in Austin, as seen from the Oasis

The Oasis still has all of its eclectic sculptures. Jeff is standing next to one of them in the photo below.

It was great to visit Austin and see the Kieffers again. But it has changed enough since I lived there 20 years ago that it no longer seems like a home I had just left.