2/28 Peace Park in Taipei, as seen through the barb wire barriers put up after the students occupied the government center

I have been thinking a lot about what to write in this blog entry. Many of these photos make me sad, as they remind me that peace and prosperity is never permanent. And yet, I respect the students for voicing their concerns. And I am glad that the government of Taiwan did not harm the protesters. The student protest ended peacefully. I did not say that it was resolved peacefully, as I think this issue of alliance with China is an ongoing concern, and likely will come up again.

The lobby of Taiwan Hero House in Taipei

We met Mama’s cousin and some of her family members for a luncheon in downtown Taipei near the government buildings. The building where we had lunch was called the Taiwan Hero House.

A military engraving on the wall, and a machine gun in the lobby of the Taiwan Hero House

It had military displays in the lobby.Somehow, this did not feel like a normal restaurant. 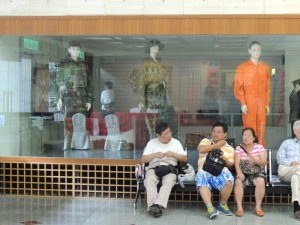 But the food was very good, and it was great to meet some more Taiwan relatives.

Mama, Papa, Ann, and Jeff was with Mama’s cousin and some of the members of her family

After lunch, Papa, Jeff, and I decided to walk over to the the government building where the student protest was going on, as it was not far from the Taiwan Hero House. This student protest had been in the news for the entire week. It started right about the time that Papa and Mama arrived in Taiwan.

We could not get near the building, as there were barricades on the street leading up to it.  And there was an additional barricade surrounding the government building itself. Jeff took the photo below with his telephoto lens, as we could not get that close to the building.

In fact, every street leading up to the government building had barricades like this one. I had seen a protest by Taiwanese aboriginals in the downtown area a few years ago, but there were only a few police officers around, and a few jersey cement barriers blocking off the street. It was nothing like this scene. 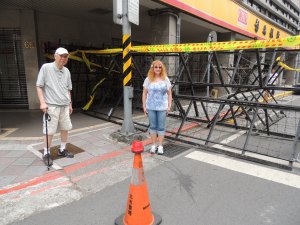 Papa and Ann are standing next to a street barricade

Police officers everywhere alongside of the barricades. Notice that these officers are carrying large poles, not guns. That is certainly different than what you would see in the US! 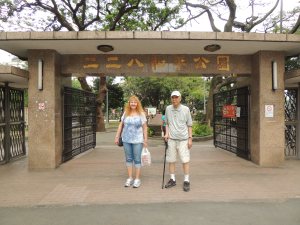 Ann and Papa are standing at the entrance to Peace Park

The park was designed by Taiwanese architect, Tsu-Chai Cheng in 1908 as Taihoku Park during the Japanese colonial period. It was the first European-style urban park in Taiwan. In 1930 Taiwan’s Japanese authorities established a radio station at the site. The station initially housed the Taipei Broadcasting Bureau, an arm of the Government-General Propaganda Bureau’s Information Office. 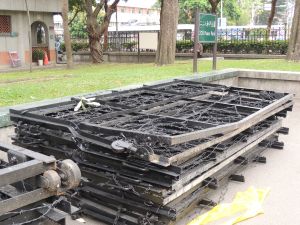 Barricades waiting to be assembled in Peace Park

The park was renamed Taipei New Park in 1945 by the Kuomintang authorities who replaced the Japanese at the end of the second world war in 1945. They renamed the broadcasting agency the Taiwan Broadcasting Company. The station became the primary broadcast organ of the Kuomintang government and military.

Barbed wire to go on barricades in Peace Park

In 1947, a group of protesters, angry over a brutal police action against Taiwanese civilians, took over the station and used it to broadcast accusations against the Kuomintang government. The action formed part of a chain of events now referred to as the 2/28 incident. A subsequent, more severe crackdown by the Nationalist government restored the station to Kuomintang control and ushered in Taiwan’s period of White Terror, when many people were killed or imprisoned.

As Taiwan entered its modern democracy period in the 1990s, the reforms of President Lee Teng-hu invited free discussion of Taiwan’s past. For the first time the 2/28 Incident of 1947 was officially acknowledged and its significance openly debated. In 1996 the Taipei City government designated the former radio station building a historical site. The building was made the home of the Taipei 2/28 Memorial Museum and the park was rededicated as “2/28 Peace Memorial Park”. 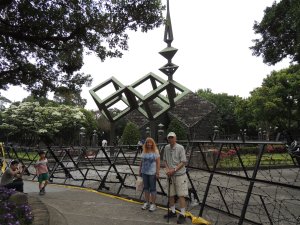 Ann and Papa are standing in front of the barricade dividing 2/28 Peace Park. The 2/28 Memorial is in the background of this photo

I have not gone downtown to this part of Taipei since these photos were taken. I hope that they have taken down these barricades.

Photo of the 2/28 Memorial in Peace Park, taken from behind the barricades using Jeff’s telephoto lens