Our hostess at the Wutai guest house made us an amazing, large breakfast before she left to go to the Sunday morning service at the Catholic church in Wutai. The food was delicious again, but there was something important (to me!) missing from breakfast. Coffee! So Jeff and I went off in search of a good cup of coffee. Normally, it would not have been hard to find a cup of coffee in Wutai, as there were several cafes and restaurants in the town. But this was Sunday morning, so almost everyone who lived in Wutai was at church service at the Catholic church. So all of the places were closed.

We finally found an open cafe, alongside of the road into Wutai. We got some good coffee, and one of the women operating the roadside cafe told us about the history of growing coffee in the southern mountain area. Apparently, the Japanese had discovered that coffee bushes grew well in the area, and produced flavorful beans. So they planted many of them. After the Japanese left Taiwan, the Rukai did not value the coffee bushes and tore many of them out of the hillsides to plant other stuff. After Typhoon Morakot, they discovered that mountainsides planted in coffee bushes had much less erosion that those planted with other things during severe rainfall. About the same time, the chief came back to the town and told everyone that they could make some good money growing, harvesting, and roasting the coffee beans. So they were learning how to do that, and planting more coffee bushes on the mountainside again. 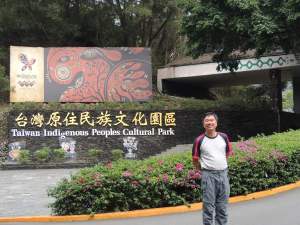 We stayed in Wutai for lunch (after the service was over and the restaurants opened.) Then we drove out of the mountains  back to Pingtung, where we stopped at the Taiwan Indigenous People’s Cultural Park. In order to preserve aboriginal culture and resources, the government of Taiwan established the Taiwan Indigenous Culture Park in Pingtung County in 1987. The park is very large, about 82 hectares in area. In the photo below, you can see the mountains where the town of Wutai is located in the background.

Most Pingtung area tourist information sites recommend that you plan on spending all day here, as there is so much to see and do. We had only a few hours in the afternoon, so we saw only a small part of the park. Hopefully, I will get back to see it again sometime before we leave Taiwan, and I can write a much more detailed blog entry! 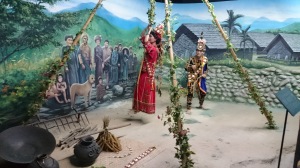 Photo of a display in a museum in the Taiwan Indigenous People’s Cultural Park, showing aboriginal cultural practices

There are several museums in the Taiwan Indigenous People’s Cultural Park. The one that we went inside had displays of some of the cultural practices of Taiwan’s aboriginal peoples.In the photo above, the aboriginals are using a ceremonial swing.

I did not have time to read the signs explaining this firecracker cannon. Hopefully.I can the next time I visit.

The Taiwan Indigenous Peoples Cultural Park has traditional tribal homes, which are located according to each tribe’s tradition and lifestyle in areas throughout the park. The photo below shows a bridge over a river near the Paiwan/Rukai area. It has the hundred pacer snake on it.

We only had time to walk around two different sections of the park.

Jeff, Mama, and Papa are standing next to a sign describing this aboriginal section. Because of all the slate stone in the sign, I am guessing it is the Rukai or Paiwan section.

Photo of Mama standing in front of an aboriginal house, possibly of the Puyuma group of aboriginals?

This section had large, long, rectangular houses built from wood, with slate floors 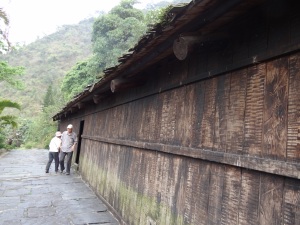 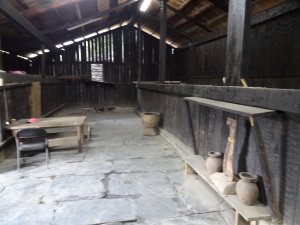 There were also people doing aboriginal cultural demonstrations in the park.

Photo of people doing aboriginal cultural demonstrations in the park

The highlight of the afternoon was a show featuring music and dancing put on a members of the many aboriginal groups in Taiwan.

There were lots of dancers and musicians in the show. The woman in the photo below shows the face painting typical of the Atayal aboriginal group. 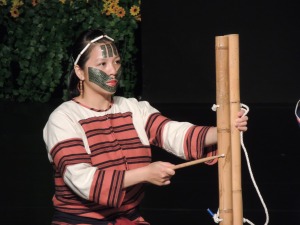 Photo of a woman playing an aboriginal instrument in the show

I hope that we can go back here again sometime! There are still many things in the Pingtung area of Taiwan that I would like to see.