Neihu (chinese translation “inner lake”) has Dahu park, one of the premier parks of Taipei, within its district boundaries. Dahu park photos have appeared before in my blog, but I don’t think I have really written much about the park itself.  So I am going to write more about the park, as I describe our April 19th outing to Dahu park in this blog entry. 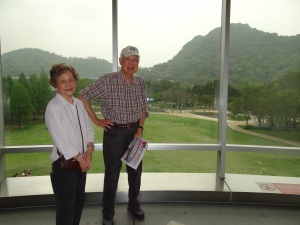 Mama and Papa are standing in front of a glass wall in the Dahu park subway station, with a panoramic view of the park behind them. You can see Mt. Balishan in the background on the right side of this photo.

We can walk or take the MRT from our apartment to Dahu park. It is very close, about a 10 minute walk or one stop away on the subway. Dahu park subway station is one of the most beautiful subway stations in Taipei. There is art on display, titled “Flying Kites at Home in the Sky”; in the station. It consists of 12 sculptures and is located around the entrance area of the station. And the glass walls of the station off the park outside.

Ann and Jeff are sitting next to a Dahu Park sign with an egret on it. 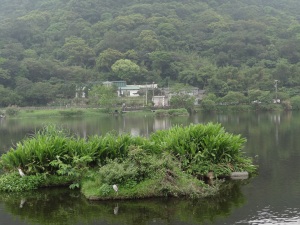 In order to encourage the water birds to return to the lake, there are a number of floating, man made islands in the lake. This is working, as there are now a lot of birds in the park !

Close up photo of a bird in Dahu park

Dahu park is one of the few places in Taipei City, where people can enjoy fishing in the city center. So there are always people fishing in the lake at Dahu park. 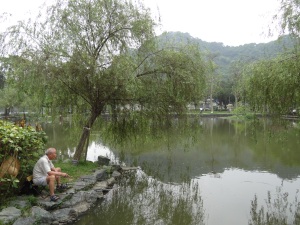 Man fishing in the lake at Dahu park

Unlike the fisherman in the above photo, this bird actually caught, and ate a fish! Jeff got some great photos of this using this telephoto lens, as the bird was sitting on one of the floating islands eating his fish. 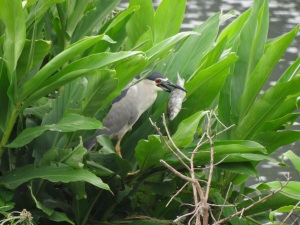 Bird with a fish caught in the lake at Dahu park

There are also lots of ducks in this park.

Duck beside the lake in Dahu park

The lake in Dahu Park has a very beautiful bridge that everyone loves have in their photos.It is called the Moon Bridge because of the way that the bridge and its reflection in the water resemble a moon. We have better photos of this bridge than the one below, but I included it because you can see our apartment building in the background behind the lake and bridge. It is the tall building standing by itself just to the right of the center of the photo. 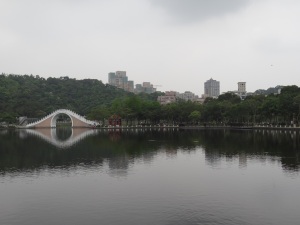 There is also a picturesque lake pavilion, which like the bridge, is built in a traditional Chinese style.

Mama, Ann, and Papa pose with the pavillion on the lake in Dahu park in the background

The Chinese-style bridge and pavilion on the lake are popular spots for taking wedding and graduation photos, and also family photos!

Ann, Papa, and Mama are sitting on a bench in the pavillion on the lake in Dahu park

Apart from the greenery and trails, the park also has a newly renovated swimming pool and a recreational facility building for the use of Neihu residents. It is also a happening place for events and activities every weekend, sort of like an outdoor common or community center. When we were there on this weekend, a large group of angels with balloons were wandering around the park.

Photo of a woman dressed as an angel in Dahu Park

They were passing out flyers to invite everyone to come and watch their Easter play at the nearby 7 Eleven. We went across the street from the park to see their play.