We went back up to Yangmingshan again on Sunday because it is slightly cooler in the mountains. July is turning into a challenge-how to do something active outside without developing heat stroke.This time, we decided to climb up from the volcanic west side of Mt. Qixing,, as that is a shorter hike up.

Jeff is standing next to the entrance sign at the Xiaoyoukeng volcanic area on the northwestern side of Mt. Qixing i n Yangmingshan National Park

Xiaoyoukeng is a volcanic geological landscape area and is located on Mt. Qixing’s northwestern side. Volcanic activity in the Yangmingshan area tailed off after the formation of Mt. Shamao some 300,000 years ago, leaving the various signs of prior volcanic activity in certain areas of the park. The Xiaoyoukeng area of Yangmingshan has a lot of active fumaroles and sulfur vents. 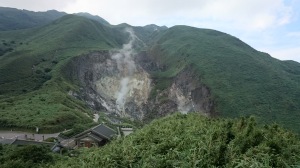 Xiaoyoukeng is approximately 805 meters (2,415 feet) above sea level, so we would only be climbing up another 315 meters (945 feet) to get up to the top of Mt. Qixing. Of course, this is meant climbing up almost a 1,000 feet in hot weather. But we were going to hike up very slowly, and pause frequently to take photos and videos.

Xiaoyoukeng is famous for the fumaroles, sulfur crystals, hot springs and spectacular landslide terrain formed by post-volcanic activity in this area..The active fumarole steam at Dayoukeng, Xiaoyoukeng, Macao and Gengziping is strongly acidic and corrosive. It attacks and disintegrates the adjacent rock, causing the rock to collapse or slide, particularly when earthquakes or typhoons occur. It is also bad for camera lens, so we have to be careful when we are taking photos or video here. For example, the photo above, and the photo below, were taken from a distance with a telephoto zoom lens. 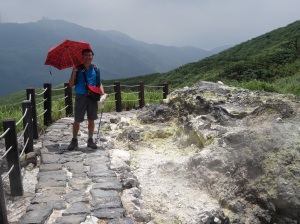 Jeff is standing next to an active fumarole area on the path from Xiaoyoukeng up to the top of Mt. Qixing

We were both using our umbrellas as sun parasols on this section of the trail, as there was very little shade. I guess that was the trade-off on this hike up Mt. Qixing. This was a shorter trail up the mountain, but it had mostly arrow bamboo and silver grass growing alongside of it. The trail on the other side has many more trees for shade.

Arrow bamboo only grows to a height of 1 to 2 meters (3 to 6 feet). Its stem is both slender and resilient, so it was often used by the local Taiwan aborigines to make arrow shafts. The type of arrow bamboo that grows at Yangmingshan  is one of three types of arrow bamboo found in Taiwan. In Yangmingshan National Park, it only grows on sheltered, sunny slopes at elevations of over 800 meters (2,400 feet). This is why there is so much of it alongside of this section of the Mt. Qixing trail. It is one of Yangmingshan’s dominant plants that flourish in the volcanic areas of the park. 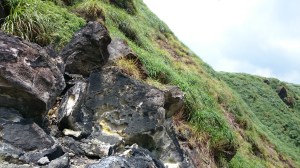 Fumarole vent with arrow bamboo and silver grass growing around it

It normally takes about an hour to reach the summit from the trail head at the Xiaoyoukeng visitor center. It took us longer on this hike because we were going up slowly in the hot weather. 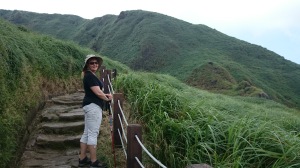 Ann is standing near the beginning of the trail up Mt. Qixing

Volcanic cones are formed by the piling up of lava flows and pyroclastic rocks around a volcanic crater. Mt. Qixing is a good example of this type of volcano. At an elevation of 1120 meters (3,360 feet) above sea level, it is the highest peak in Yangmingshan National Park. This is also one of the younger volcanoes in the park, and thus it has the most intact conical shape.

Jeff is standing next to the stone marker at the top of Mt. Qixing

Clouds had blown in and were covering the top of Mt. Qixing when we reached the summit. The cloud cover combined with the elevation made it very cool and comfortable on the top of the mountain. I took a photo of the thermometer on the summit showing that the temperature was a pleasant 70 degrees Fahrenheit (21 degrees Celsius).  Definitely, the most pleasant outside temperature that I had felt since April here in Taiwan!

Thermometer at the top of Mt. Qixing

Jeff is on the trail up to the top of the East Peak of Mt. Qixing

Stone marker at the top of the East Peak of Mt. Qixing

Jeff is standing on the top of the East Peak of Mt. Qixing

Even though it was cloudy, Jeff was still trying to take videos from the top of the mountains. 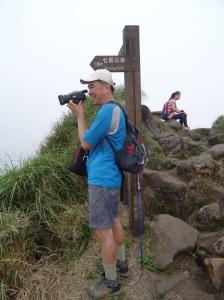 So I tried to photograph butterflies why he was taking videos. May, June, and July are the peak times to see butterflies in Yangmingshan National Park. There were a lot of butterflies on the trail, and even on the tops of the mountains.

It is very hard to take good photos of butterflies. They usually do not stay in one place for long enough for the camera to focus on them! The butterfly in the photo below did a much better job of posing for me!

The trail down the south side of Mt. Qixing is longer, but it has many more trees. It was shady and we were going down, so this was a very pleasant walk back to the start of the trail at the main visitor center..

Photo of the tree-shaded trail on the south side of Mt. Qixing

Jeff is resting on a bench alongside of the south Mt. Qixing trail

When we arrived at the bottom of the trail by the visitor center, it was hot again. But it was a great hike, and I could now get on an air conditioned bus for the drive back to Neihu!

Jeff is standing next to the sign at the trail head of the Mt. Qixing south trail near the main visitor center