We began this hike with an easy start, by taking a taxi up a road up into the mountains to the highest point that the road goes. This enabled us to get to near the top of the trail in less than 30 minutes, without getting all sweaty and tired. This might be the best way to go when hiking in the subtropical Taiwan summers!

From where the taxi dropped us off, it was just a short walk to a viewing platform. 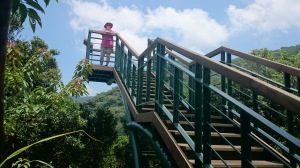 I think that this view is looking across the lower mountains towards the higher mountain peaks of Yangmingshan.

View of the mountains taken from the viewing platform

Jeff is standing on the roof of a gravesite at the top of the mountain, with a good view of Taipei

Jeff was interested in getting some good photos and videos of Taipei from the cemetery. I was more interested in the cemetery itself. Most of the family gravesites here were large and beautifully maintained. Some were Christian, as you could tell from the crosses and angel statues.

Christian family gravesite on the top of the hill 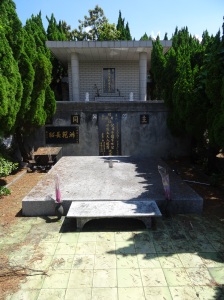 Traditional family gravesite at the top of the hill

Most of the family gravesites were in good shape, but a few were neglected and overgrown. 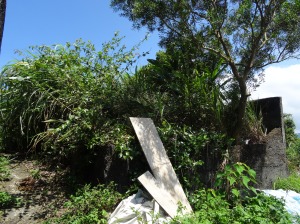 Neglected family gravesite at the top of the hill

After we left the hilltop cemetery, we walked towards the nature trail. We walked by this pond right before we arrived at the trailhead. I am going to call it frog pond, because it looks like the type of pond that frogs would live in and enjoy!

Ann is standing on a platform next to frog pond 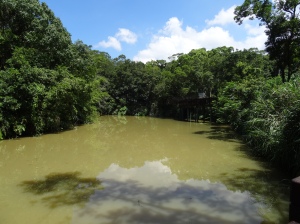 Close up photo of frog pond

There were two very cute stone frog statues wearing gold crowns at the start of the trail. I do not know the Chinese name for this trail, so I am calling it the “Frog Prince Trail” in my blog.

The Frog Prince is a fairy tale, best known through the Grimm Brothers’ fairy tale storybook. Traditionally it is the first story in the book.

In the fairy tale story, a spoiled princess reluctantly befriends the Frog Prince. She meets him after she drops her gold ball into a pond, and the frog prince retrieves it for her. 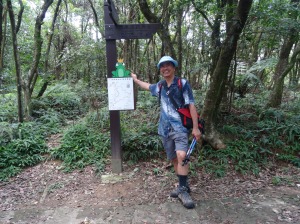 In another earlier version of this fairy tale, the frog magically transforms back into a prince after spending the night on the princess’s pillow. The frog below likes a bit like he is tucked into a bed with his head on a pillow! 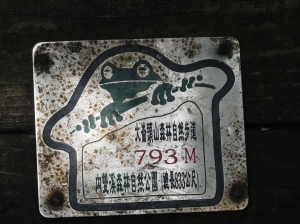 Cute frog plaque on the trail walkway. For some reason, this frog is not wearing a crown!

A popular phrase related to this fairy tale is, “You have to kiss a lot of frogs before you find your handsome prince.”

This was a wonderful, well maintained trail. It was easy to walk on, and had many interesting things to see and great views, along with all of the cute frogs. 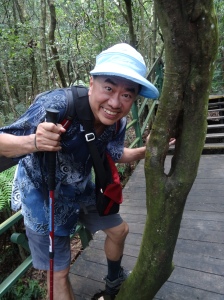 For some reason, there was a snail and not a frog at the other end of this nature trail.

But there was a large rock with a stone frog statue on it in the field across from this end of the nature trail. 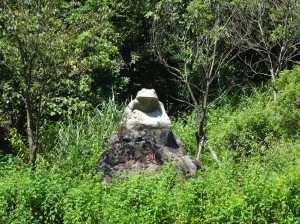 We had not carried enough water with us, so I was very thirsty when we were done walking on this nature trail. Fortunately, we did not have to walk far down the road before we arrived at the Coffee 101 Cafe. This cafe had a great view of Taipei 101 on their deck. But it was very hot sitting out on the deck, even under the umbrellas over the tables, so we chose to sit around on the side of the cafe in the shade.

Ann is standing next to a sign for Coffee 101 Cafe

They served us a delicious fruit tea drink alongside a bowl of fresh fruit. There was music playing when we entered the cafe, but it stopped right when we were served our fruit teas. Jeff went inside to ask why there was no music playing, and then ended up spending much of the next hour trying to help the cafe owner fix his sound system. 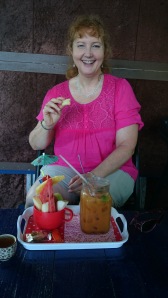 The cafe served only drinks and snacks, so when we were finished enjoying our fruit trees, when headed down the road looking for a place to eat lunch. Before long, I started to recognize my surroundings. We were back in a section of the Neihu mountains near the Bishan Temple, where we had gone hiking before. We knew that there was a place to get something to eat on the other side of the mountain across the suspension bridge.

We walked across the bridge to the garden restaurant on the other side of the bridge. 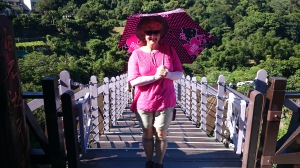 Ann is standing on the suspension bridge

We were so hungry that we ate lunch without taking a photo of our food! But we did take a picture of the shaved ice dessert before we ate it!

After lunch, we walked down the waterfall trail back to Neihu. The area of the trail near the waterfall was very crowded. People were shouting, dogs were barking, and kids were running around everywhere. 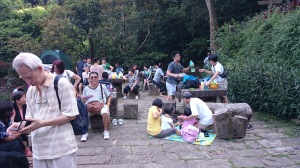 Busy scene near the waterfall

There was even an old man washing his clothes in the pool of water below the waterfall. That is something that I have not seen since I left China!

This was a fun hike, and I am sure that I will go back to the Frog Prince nature trail again!